A very active House System promotes the integration of the different age groups all the way from Pre-Nursery to Class 11.

On entering the school, all students are allocated to a House and, in principle, members of the same family will be allocated to the same House. Membership of a House enhances the student’s sense of identity and belonging and creates a spirit of friendly competition and cooperation, as well as providing additional opportunities for participation in various non-academic events.

The Houses at Botafogo are named after animals indigenous to Brazil, one from each group of birds, fish, reptiles and mammals.

Caimans are reptiles that spend most of their lives in the water. They live in freshwater habitats in South America, including the Amazon basin and the Pantanal.

Caimans swim very well, mainly using their tails to propel themselves through the water, and also using their webbed feet.

Caimans hunt at night. They eat fish, including piranhas, and also eat birds, turtles, reptiles, and mammals. They have long, sharp teeth which are used for catching prey but swallow their catch whole.

The Jaguar is the largest feline of the Americas. The jaguar swims well and lives in habitats where there is plenty of water like rainforests or seasonally flooded swamp areas like the Pantanal in Brazil. It is an endagered species because of hunting and human occupation and destruction of their natural habitat.

In the Brazilian Pantanal males average 100 kg and females 76 kg. The Jaguar has golden or brownish-yellow fur and many black spots. It has a large head and stocky build, with relatively short limbs.

The jaguar eats large prey, such as peccaries, tapirs and deer, but it will eat almost anything it can catch. In areas where cattle are raised in jaguar natural habitat cattle are often their most frequent prey species. 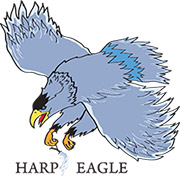 The Harpy Eagle is the largest eagle and the most powerful bird of prey in the world. It is a lives in Central and South American rainforests and is an endangered species because of the destruction of its habitat and also because of hunting.

Harpy Eagles are carnivores and they hunt and scavenge during the day. They eat sloths, monkeys, opossums, large reptiles, large rodents and other birds. Harpies build a large nest made of sticks and twigs, usually located very high in trees or on cliffs. Females lay 1-2 eggs each time, but only one survives. Both parents care for the young and they mate for life.

The Arapaima, also known as Pirarucu, originates in the Amazon Basin. It is one of the largest freshwater fishes in the world and can grow up to 4m long.

The average size is 2 to 2.4m with a weight of 90kg. The elongated body is covered with large scales. The head has a green-copper shine and the body is a darker blue-green on the top and fades to a white belly. Towards the end of the body the fins are edged with red. The caudal fin is dark and rounded.

The arapaima uses its fins to hollow out a nest in clear, shallow and sandy-bottomed areas of the river. Even though it is large, the arapaima is a graceful swimmer and it is valued as an aquarium fish as well as for food.

The Houses at Urca are named after famous British personalities of the 20th century.

Stephen Hawking, was born in 1942 (300 years after the death of Galileo) in Oxford, England, has come to be thought of as the greatest mind in physics since Albert Einstein.

Stephen Hawking worked on the basic laws which govern the universe – Einstein’s General Theory of Relativity, space and time, the Big Bang, Black holes. In his own words, his goal was to achieve “complete understanding of the universe, why it is as it is and why it exists at all.”

Mr Hawking remained extremely busy throughout his life, despite being afflicted by Lou Gehrig’s disease (amyotrophic lateral sclerosis, a disease that affects muscle control) for which he used a wheelchair and spoke through a computer and voice synthesizer. On 14-March-2018, he passed away in Cambridge, England.

Margaret Mee, born near Chesham, Buckinghamshire, England on 22 May 1909, was one of the 20th century’s most accomplished botanical artists and also a conservationist.

Margaret Mee studied the Amazon flora and her drawings were executed whilst on location. Her many paintings, over 400 in total, were sketched in pencil and then painted with gouache. Many of the species that Mee was able to paint in their natural habitat had not been identified before. Margaret Mee died tragically in an automobile accident in Leicester, England on 30 November 1988.

Emmeline Pankhurst, born in Manchester, England in 1858, led the suffragist movement in Britain which won women the vote. In 1903 she established the National Women’s Social and Political Union, with the slogan “Votes for Women”. The NWSPU adopted more militant tactics in 1905 and shook the country until 1914 in the struggle to gain voting rights for women.

During World War I, Mrs. Pankhurst and her followers shifted their energy to patriotic work, supporting their country in the war. Women over 30 years of age gained the right to vote in Britain in 1918, but it was only a year after Mrs. Pankhurst’s death, in 1928, that universal suffrage was granted.

George Orwell, pen name of Eric Arthur Blair, was born in India on June 25, 1903. Orwell gained prominence in the late 1940s as the author of two brilliant satires attacking totalitarianism – Animal Farm (1945) and Nineteen Eighty-Four (1949). His complete works, including novels, documentaries, essays, and criticism have since established him as one of the most important and influential authors of the 20th century.

The Houses at Barra are named after legendary and mythological creatures.

Dragons. There are two main types of dragons: European Dragons and Chinese Dragons. The European Dragon is a creature that looks like a gigantic serpent or lizard with wings. They have thick scales like either a fish or a snake.

Dragons generally also have short legs, which they use to get around on foot. They use their leathery wings to fly long distances and over mountains and large stretches of water. They will destroy anything in their path by burning it with their fire-breath.

Chinese Dragons are benevolent creatures that are friends to humans. They are symbols of power and strength.

Powers: From legends, the dragon gains a reputation for strength, vigilance and wisdom. Vikings had dragon figureheads on the prow of their ships. The dragons on the ships were believed to endow keen site and cunning to the Viking warriors.

Griffins have the head, claws, and wings of an eagle and the body of a lion. Griffins make their nests in the highest mountains and line them with gold.

Griffins represent the wealth of the sun, and are popular heraldic figures.

Powers: In its body, the griffin is blessed with the speed, flight, and the vision of the eagle and the strength, courage, and majesty of the lion. 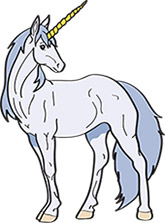 Unicorns are one of the most popular of all magical creatures. They are white animals which the head, body, and tail of a horse and the hind legs of an antelope. They have the whiskers of a goat, but perhaps the most noticeable feature of unicorn is the long horn located on the forehead.

Powers: Throughout the stories of the unicorn, its horn, the alicorn, is said to have great medicinal powers. The dust filed from the horn was supposed to protect against deadly diseases if mixed into a potion. Or, if you drank from the horn, you would be protected against any poison.

The Phoenix is a giant bird that feeds only on air. It lives for 500 years and then flies to Phoenicia where it builds a funeral pyre on the top of the tallest palm tree it can find and dives into it. After nine days the Phoenix is reborn from the ashes.

Since very ancient times the Phoenix has been seen as a symbol of resurrection.

Powers: Sitting in the nest, and having turned to face the rays of the sun, beating its wings, it deliberately fans the flames for itself and is consumed in the fire. Once the old body was consumed, the phoenix would be reborn from a worm, its marrow, or an egg found among the ashes and would embark on another 500 years of life.

Read More
We use cookies to store information about how you use our website and the pages you visit, solely to make your experience as pleasant as possible. We do not collect any other personal data or information during its use. By clicking on “I Agree”, you consent to the use of cookies.
Accept